After Waterloo, the Art of Peace

Kate Heard, Senior Curator of Prints and Drawings at Royal Collection Trust, describes the cultural legacy of the Battle of Waterloo through the art in the Waterloo Chamber at Windsor Castle. 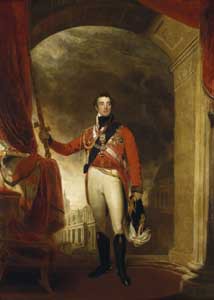 The Battle of Waterloo, fought two hundred years ago, has left a broad cultural legacy. Paintings, sculptures, prints, medals, histories, novels and songs were all produced to mark the victory of an alliance of European countries over the French emperor, Napoleon Bonaparte. One of the most interesting commemorations of the battle is the Waterloo Chamber at the heart of Windsor Castle, which is hung with a series of paintings commissioned by George IV from Thomas Lawrence, and which is the focus of Waterloo at Windsor 1815–2015, currently on display at Windsor Castle. The room forms an impressive portrait gallery of the most powerful figures in Europe in the early nineteenth century, but although it bears witness to the battle, its origin can be found in the celebration of peace. 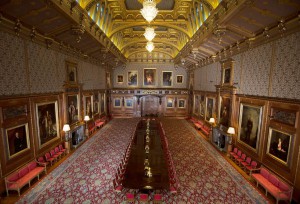 Lawrence’s series of paintings depicting the men who came together to defeat Napoleon had its roots in 1814, before Waterloo. In June of that year, many of Europe’s leaders visited London to celebrate peace after Napoleon had been exiled to the island of Elba. The Prince Regent, host of the London visit, commissioned Lawrence to paint portraits of those who attended.  Among the figures portrayed at this time were Alexander I, Emperor of Russia, and the Prussian commander, Field Marshal Gebhard von Blücher, a celebrated military veteran. After the celebrations in London, a Congress was held in Vienna to settle the terms of peace, hosted by the Austrian Foreign Minister Metternich (whose portrait by Lawrence is also on display in the Chamber). 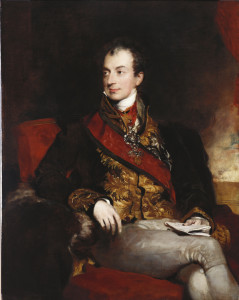 The 1814 peace was shortlived. In February 1815, Napoleon escaped from Elba and returned to power in Paris. On 18 June 1815, the French army was defeated by Allied forces commanded by Wellington and Blücher at Waterloo in present-day Belgium. The victory was, George III’s daughter Charlotte wrote, ‘a happy end to a War that threatened the ruin of Europe’ and Napoleon’s defeat was widely celebrated.  After the battle, Lawrence’s commission was expanded to include those who were involved in the final peace settlement, and he travelled across Europe to fulfil his brief, spending time at the peace negotiations at Aix-la-Chapelle as well as in Italy. Among those captured in paint by Lawrence during this Grand Tour were Francis I, Emperor of Austria, Pope Pius VII, and Cardinal Consalvi. 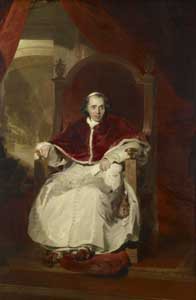 In the 1820s and 1830s, Lawrence’s paintings were brought together in the Waterloo Chamber, a vast room which was created expressly to house them by roofing over an open courtyard in the north range of the castle. Although named for the battle, the Waterloo Chamber, with its portraits of heads of state and prominent politicians as well as leading military figures celebrates the discussions of peace and international co-operation which accompanied the fighting of the Napoleonic Wars. It is a fitting monument to a period in which debate became as important a tool of international negotiation as military might and to the peace which was the legacy of the Battle of Waterloo.
Waterloo at Windsor: 1815 – 2015 is at Windsor Castle until 13 January 2016.

Videos of the Chamber can be watched here