In this, the last of our series of blogs exploring the BBC Charter Review public consultation, we look at how the Corporation is governed and regulated.

Good governance and regulation are vital for a successful BBC.  This is because it ensures the BBC does what it is meant to do, spends its income sensibly and effectively, and works for the benefit of the licence fee payers without whom it could not exist.

At the moment the BBC is ‘governed’ by three distinct bodies, each with its own function.  The BBC Trust is the sovereign body of the BBC, acting as stewards of the licence fee, guardians of the public interest and the body for setting the Corporation’s strategic direction and how it allocates its budgets between particular purposes.  Then there’s the Executive Board, chaired by the Director General, which is responsible for the day-to-day running of the BBC: its output and the appointment and management of staff.  Ofcom also plays a role, regulating broadcast content, handling complaints and acting as a consultant on other matters. 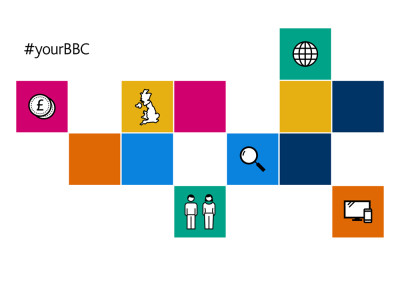 This triple-layered model works well in many respects, but public disquiet about the BBC’s handling of the Jimmy Savile and Lord McAlpine cases, the failed Digital Media Initiative, and the issues around senior staff members’ severance payments have exposed weaknesses.

Three reform options are on the table:

Each option has its supporters, although all three beg the question ‘To whom should the governing body be accountable?’  So Question 15 simply asks for views on how the current model of governance and regulation be reformed?

This section also looks at a wider range of governance issues.  For example it addresses issues around Service Licences and Public Value Tests.  The former set out what each BBC service should be doing and how it should go about it, while the latter are the means by which any changes are assessed.  This way of doing things has been widely welcomed but there may be room for improvement, so Question 16 asks how Public Value tests and Service Licences might be reformed and who should be responsible for making these decisions?

Another area considered in this section is accountability.  The BBC is a public body and its relationship with its funders – the licence fee payers – is immensely important.  Accountability is provided by Research and Audience Councils who are a direct conduit to viewers, listeners and uses of online services; a general presumption that the BBC will be transparent in its operations and decision making; and an effective complaints procedure.  Question 17 asks how could the BBC improve engagement with licence fee payers and the industry, including through research, transparency and complaints handling.

Accountability to the UK Government, the devolved nations and to Parliament through its various committees is also extremely important, and the relationship between these bodies and the BBC is also covered in the consultation.  Question 18 asks for views on how this relationship would work, and what accountability structures should apply.

Finally, Question 19 considers the role that the BBC’s Royal Charter plays.  Established in 1927, it has served the Corporation well but some fear it lacks flexibility in a media environment where change is happening apace.  The duration of each Charter – and its accompanying Framework Agreement  – has varied over the years so there is a case for making it consistent, perhaps with a mechanism for mid-term review.  So the question asked is: should the existing approach of a 10 year Royal Charter and Framework Agreement continue?

On 16 September 2015 an independent review was announced, to be led by Sir David Clementi. This will look at questions 15, 16 and 17 and will consider people’s answers to these questions. The review will report to the Secretary of State in early 2016 and will be published.

These then are the final set of issues that the consultation paper seeks your views on and you can have your say in #yourBBC now online, via email or via post.