Remembrance makes me feel connected to those who gave their lives

Lieutenant Colonel Kevin Roberts, the lead musician on Remembrance Sunday, talks about its significance for the nation.

It is almost time for our nation to once again gather at the Cenotaph and pay tribute to those who gave their lives in conflict, writes Lieutenant Colonel Kevin Roberts, the Senior Director of Music for the Household Division.

As the Senior Director of Music for the Household Division, my job is to lead the music of the military bands at the Cenotaph.

It’s a hugely challenging but greatly rewarding role, especially on Remembrance Sunday, and one I have held for the last six months. 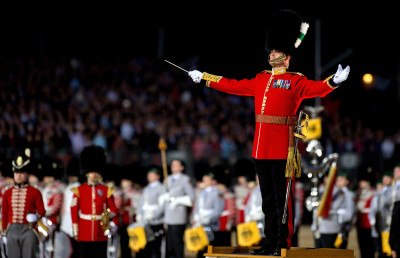 Pictured: The performance is brought to a close with the national anthem.
Photo credit: Corporal Daniel Wiepen, Crown Copyright.

To see the monarch, representatives of State, the Armed Forces and members of the public come together to pay their respects as one is incredibly moving.

When I stand out there on Remembrance Sunday, I can’t help but feel very connected to them in some way. I am sure I am not the only one who finds it an opportunity to identify with loved ones or ancestors who sacrificed so much for us to be here today.

What is also moving is the determination of some veterans to make it to the service. You can tell some people have attended regardless of their state of health. To them there is no question – they have to be on parade.

Remembrance has a huge significance for the nation and people should respect that and pay attention to that because it is something we should always recognise.

Lieutenant Colonel Kevin Roberts is the Senior Director of Music for the Household Division in London. He has been in the post for six months and led music for the Queen’s Birthday Parade and the Chinese State Visit.