Worth its weight in… silver

Philippa Glanville is a leading authority on silver and decorative art and a member of the Reviewing Committee on the Export of Works of Art, an independent advisory body providing guidance on whether an item that requires an export license is of national importance. Here Philippa explains the significance of two of the latest items placed under an export bar by Culture Minister Ed Vaizey. 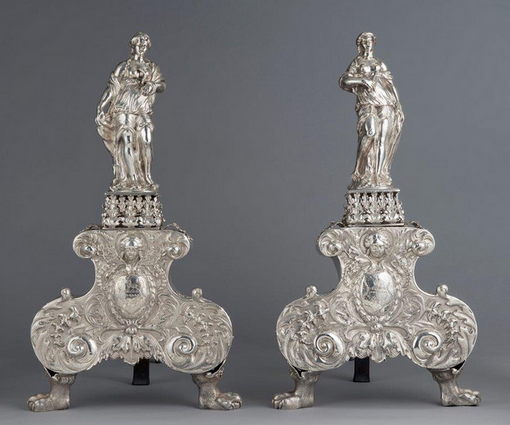 Silver loves candle flames and firelight, and the human hand. These firedogs, made for the chamber of a late Stuart noblewoman, would have caught and reflected light and heat back into her room at night, while the iron rods stretching out behind bore the burning logs.

Appropriately female subjects added to an already expensive luxury, the figures of Cleopatra and Lucretia have been skilfully modelled in the round by an unknown sculptor. They screw into the bases, which are hollow, so as not to waste the expensive metal.

Typically silver objects have unique documentary qualities among the decorative arts and indeed in comparison with all art forms. Each bears marks struck when it was assayed, dating the year and place of that test and identifying the goldsmith (with costly objects, the retailer, not the actual maker).

As with most London silver, the dogs are struck not only with hallmarks, identifying the London goldsmith who sold them and the year they were assayed at Goldsmiths Hall, but also engraved with the arms of their owner. This clue, sometimes a crest but in this case the full arms of Admiral Edward Russell and his second wife Lady Margaret Russell, tell us about the family history. Thanks to this embodied evidence, their ownership can be traced through to the twentieth century and they have been spotted in an early Country Life photograph.

Often with silver there’s a weight scratched into the object, even something on as modest as a spoon or fork, because the owner wanted to ensure that a dishonest servant wasn’t filing off small quantities of silver. So objects were weighed regularly and can be tracked through inventories, bills and later sale catalogues, leaving an exceptionally rich paper trail and social history for silver.

Then there are the physical pleasures of the moon metal, its cool weight and balance in the hand (something not possible to enjoy in most museums, although the V and A Whiteley Silver Galleries offer visitors an object or two to handle), its chink and ring and its intricate network of tiny scratches from many years of wear – the true explanation of that mysterious quality called patina. Often polished away in the twentieth century, because of the demanding glare of electric light this gentle deep surface is a treasured aspect of the best antique silver

Today few buyers would want silver firedogs but in the past forty years there has been a renaissance of silver created by a new wave of talented artists and designers. Thanks to the Makower Trust, the Crafts Council and other patrons, their work is on show in major  museums, on sale at the autumn Fair at  Goldsmiths Hall and promoted online.

Passionate about the crafts, Sir Roy Strong can claim credit for initiating the V&A’s contemporary collection when he was Director .In the last decade visitors flocked to shows of new British silver in Edinburgh, Beijing and St Petersburg and the V&A expects crowds at talks, events and exhibitions about contemporary silver design running from March 2016 until the end of 2017.