Zoë Wilcox, lead curator of Shakespeare in Ten Acts, adjusts a human skull given to Sara Bernhardt by Victor Hugo. On loan from the V&A. © Clare Kendall

How did we become so obsessed with Shakespeare? This is one of the questions which the British

Library’s exhibition Shakespeare in Ten Acts sets out to answer. As curator of the exhibition, I’ve spent the last two years combing through the Library’s rich and varied collections finding stories that illuminate how and why Shakespeare became the global, cultural icon he is today. The result is an exhibition which looks back at over 400 years of performance, from Hamlet at the Globe around 1600 to a digital remix of the same play produced in very different circumstances in 2013. Together the Ten Acts tell the story of Shakespeare’s seemingly ever-increasing reach, reputation and relevance, but the Bard’s course never did run smooth. We also look at the hiccups he faced along the way, from being branded an ‘upstart crow’ by one jealous fellow playwright at the beginning of his career to the row that erupted over whether he deserved a coat of arms, and even the piece of Nimbyism that in 1596 prevented his company from opening their brand new theatre due to the objections of local residents.

The slights and injustices continue when we move beyond Shakespeare’s lifetime and start to explore his legacy. Despite being honoured with the publication of his First Folio seven years after his death, Shakespeare was soon regarded as somewhat old-fashioned and outmoded. When the the theatres reopened after the Civil War in 1660, the newly formed theatre companies had to rely on old plays such as Shakespeare’s which they rewrote to suit contemporary tastes.

And it wasn’t just in Britain that Shakespeare’s plays were out-of-step with the times: the French writer Voltaire declared that Shakespeare was ‘The Ruin of the English stage’ and, skipping forward to the 20th century, Leo Tolstoy declared his disapproval of the Bard by writing a book meticulously describing the playwright’s every fault. Why this criticism of Shakespeare? Well, in the main, it has been because we have praised him so excessively that it became inevitable that a few dissenting voices would pipe up to counter the prevailing narrative. 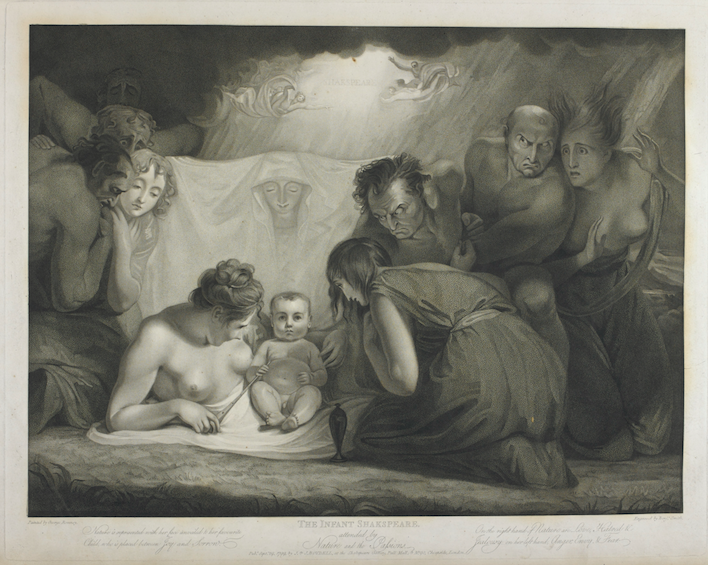 ‘The Infant Shakespeare Attended by Nature and the Passions’, engraving by Benjamin Smith based on a painting by George Romney, 1803. The truth is that ‘Bardolatry’ has been pretty much unstoppable since David Garrick presided over his Shakespeare Jubilee of 1769. Though not one word of Shakespeare was performed in the whole three day festival, the event was talked about far and wide and succeeded in kickstarting the Shakespeare industry we have today. The exhibition shows how this rain-sodden event (a sort of proto-Glastonbury for Shakespeare fans) led to the Shakespeare forgery crisis of the late 18th century, which in turn generated numerous column inches and a great deal of Shakespearean satire.

Wherever Bardolatry rears its head, parody and satire are never far away and they only fuel further interest in our national poet. Despite mutterings from some quarters that we may have reached ‘Peak Bard’ with our commemorations of Shakespeare’s 400th anniversary, such is his profound cultural influence that I predict that we will still be talking about him in another 400 years.

Shakespeare in Ten Acts is at the British Library until 6 September 2016.