Kate Adie – My Memory Square for the Path of the Remembered 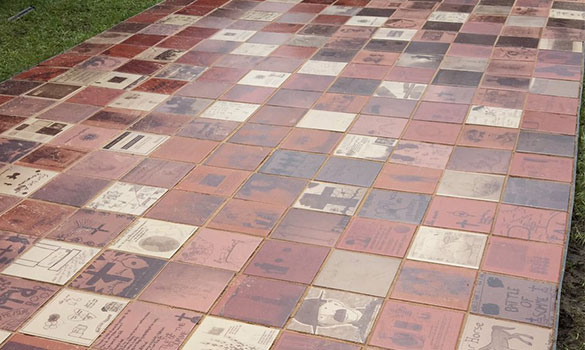 Path of the Remembered

Journalist Kate Adie shares her inspiration for her contribution the the Path of the Remembered.

Mary Sangster filled shells with TNT twelve hours a day. Work in a munitions factory was demanding and dangerous. Hundreds of thousands of women like her were hard at work throughout the country, supplying the voracious demands of the WW1 battlefields.

They were ‘doing their bit’, patriotic – and in the public eye in an era when women had little status, few rights, and no vote. They were doing a man’s job – but were paid around half the men’s wages. They wore trousers to avoid long skirts caught in dangerous machinery – and were often jeered at by those who disapproved of such a shocking innovation.

They played football – hundreds of factory teams raising thousands of pounds for bereaved families and in front of thousands of men astonished by girls in mob caps and shorts.

They also looked after large families at home, lived on meagre meals, for society thought women ‘men need beer and baccy, women get by on tea and toast.’ Every day they faced the possibility that their men might not come back from the war.

In 1917 Mary Sangster went home from a shift to give birth to a bright yellow baby – the TNT had caused a ‘Canary Baby.’ She went back to work the next morning. The colour faded, the impact of that war is still felt today.

For more information about how to contribute your own Somme story to the Path of the Remembered please visit: www.somme100path.co.uk