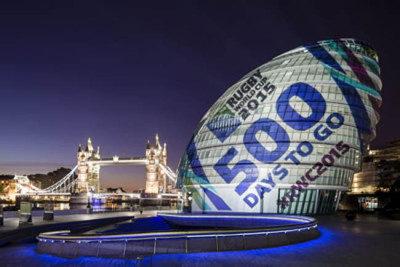 LONDON, ENGLAND – MAY 06: In this image (released on May 6, 2014) City Hall in London is turned into a giant rugby ball (through light projection) to mark 500 Days to go until the start of Rugby World Cup 2015, hosted in England. England Rugby 2015, the Organising Committee for Rugby World Cup 2015, will today announce the date when tickets for all 48 matches will go on sale to the general public. England will play their opening match at Twickenham Stadium on September 18. The original image is created through projection onto the building and was taken on May 4, 2014. (Photo by Miles Willis/Getty Images)