Glasgow’s inspirational Commonwealth Games shows sport is for all

Everyone knows that the UK has a well-deserved reputation for putting on major sporting events.  So no one should have been surprised that Glasgow has more than delivered with a fantastic XX Commonwealth Games so far.

I spent the weekend in Glasgow and the city has done a fantastic job welcoming the Commonwealth.  The spectators who came along have supported all the athletes and have been rewarded with some brilliant performances and inspiring displays.

I firmly believe that sport is capable of producing moments of pure emotion, and one of the most wonderful, magical moments of the Games to date was 13-year-old Erraid Davies win bronze in the breaststroke in front of a home crowd.

Her smile on the podium was something special.

But the Games in Glasgow have also served as a reminder that the most inspirational performances don’t always involve a medal.

I had the honour of handing the official gift to marathon winner Michael Shelley of Australia.  His victory was a fantastic achievement that came from years of hardwork, determination and sacrifice.  But it wasn’t necessarily the most inspiring story from the marathon. That, for me, was England’s Steve Way who came in tenth.

Rarely will the tenth person to cross the line be featured in national newspapers but Steve’s journey is remarkable.  It’s fair to say that a few years ago he wasn’t exactly a world class athlete – he was over 16 stone and smoking 20 cigarettes a day.  Now he has represented his country at the Commonwealth Games.

Steve is living proof that sport is for all.  And while elite-level marathons may not be quite right for everyone, there really is a sport out there for everyone.

I hope people who don’t exercise, who get out of breath running for the bus, see what Steve has achieved and realise they too can get active and improve their health by finding a sport they enjoy. That’s how Steve started on his journey.

The Commonwealth Games is a fantastic showcase that allows people to watch top-class athletes competing but there are so many people not in the spotlight who give up their time to help people get involved in sport day-in-day out.

I was fortunate enough to meet StreetGames volunteers in Glasgow who had come from all over the country for a special sports camp working with young people.  The charity does some incredible work taking sport to kids in deprived communities and the young leaders are real role models that the participants look up to.  It was fantastic to see that in action. I got involved a bit myself too, playing some table tennis and I even managed to score in a football penalty shoot-out. The smiles on the faces of the young people said it all, highlighting once again that sport is for everyone.

I also met up with Judy Murray who showed me her Miss-Hits programme that aims to get girls aged 5 to 8 playing tennis.  Both Mis-Hits and Street Games share a common goal – to get young people playing sport and, most importantly, enjoying sport.

Everyone who plays sport knows that it makes you fitter and healthier but it is also enjoyable and can help form friendships, encourage teamwork and build camaraderie amongst people.

I hope all those watching Glasgow in the stadiums and from their living rooms will be inspired to try different sports and find one, or more than one, that inspires them.

It doesn’t need to be running 26 miles like Steve Way, but get out there and give sport a go. 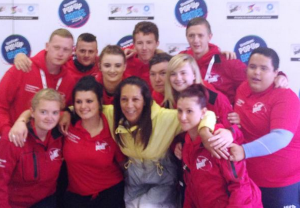