Reflecting on my first months

They say that a week is a long time in politics. Well, it’s been about 18 weeks since the Prime Minister appointed me as Secretary of State for Culture, Media and Sport, so you can imagine the amount of incredible work and events I’ve seen and been involved with since then.

First and foremost, there were this month’s First World War centenary commemorations, which saw the nation coming together to reflect on our past and give thanks to those who fought for Britain and the Commonwealth. In homes, offices and public and private buildings up and down the country, millions of people took part in the Lights Out project, remembering those who made the ultimate sacrifice for their country a hundred years ago. I had the honour of attending both the national memorial service at Glasgow Cathedral and the special commemoration at the St Symphorien war cemetery in Belgium, two very different but equally moving events. 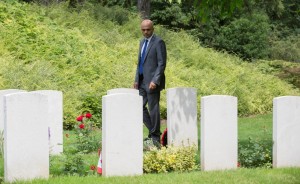 The whole of the UK came together in very different way when Glasgow staged the 20th Commonwealth Games. The weather wasn’t always perfect, but the city put on the warmest of welcomes as Scotland played host to some of the world’s top athletes. Just like the 2012 Olympics, the Games will leave behind a lasting legacy and help to inspire the next generation of sports stars.

Scotland wasn’t the only part of the UK that saw amazing feats of athleticism this summer – the world’s largest annual sporting event came to England, when the Tour de France rolled its way through Yorkshire, Cambridge and London. I was at the Grand Depart in Leeds, and was delighted to see the vast crowds lining the course for mile after mile. Riders and organisers said they’d never seen anything like it, a great welcome to the world and a great advert for Britain. Two days later I got another – albeit very brief – look at the Tour when the riders raced right past my office window as they sprinted towards the finish line on the Mall. It certainly made a change to the usual parade of buses and taxis!

Britain’s proven ability to host events like these is one of the reasons our tourist industry is doing so well. The first six months of this year the most successful period ever for British tourism, with more overseas visitors spending more than ever before. It shows the Government’s tourism strategy is working, creating more jobs and growing the economy.

Surveys also show that Britain’s incredible culture is a massive draw for tourists, so it’s been great to see our world-beating creative industries going from strength to strength – they’re now worth more than £8 million an hour to the economy. Our film and TV industries are doing particularly well, and as a life-long sci-fi fan I was delighted to be able to visit the set of the new Star Wars film being made just outside London. In June, Warner Brothers announced that the film adaptation of Harry Potter prequel Fantastic Beasts And Where To Find Them will also be made right here in the UK, even though it’s set in New York.

Elsewhere at DCMS, we recently saw that 72 per cent of UK homes now have a broadband connection. Average broadband speeds have trebled since 2010 and, thanks to a multi-million pound government investment programme, we’re well on course to reach our target of getting superfast internet access to 95 per cent of the country by 2017.

Finally, I was extremely proud to be Secretary of State for Equalities when the first marriages between same-sex couples took place. It marked a significant step forward for LGBT equality, and one that was long-overdue.

So it’s been an incredible few months both for myself and for the department. I’ve experienced the very best that Britain has to offer in the fields of culture, media and sport, and met and worked with leading figures in everything from TV comedy to telecoms policy. I’ve seen a lot, learned a lot, and have a clear view of how the department can make a real contribution to Britain’s long-term economic recovery in the months ahead.

This has been an exciting period for everyone at DCMS, but the best is yet to come.