A meeting with the Mayor

On day 40 I was scheduled to walk from Munister to Ladenberger, which would involve walking 21.7 miles. This would take the current total of my walk to 722.0 miles.

I didn’t want to leave Munster. I had fallen I love with the city. It was that mix of university, history, politics and church which reminded me of Durham and Oxford. I have never seen so many bicycles, there may be ‘Nine million bicycles in Beijing’ (Katie Melua) but in Munster they are all on the road at the same time. Most of all it is a place which will be remembered in history for the peace that was negotiated there rather than the wars which were fought there. As I left the Hall of Peace I noticed a small cast iron plaque in the fireplace with the inscription ‘Pax optima rerum 1648 ‘ which translates ‘Peace is the greatest good.’ I went out of the Town Hall and into the magnificent Church of St Lamberti where I sat and pondered these things and lit a candle for peace. 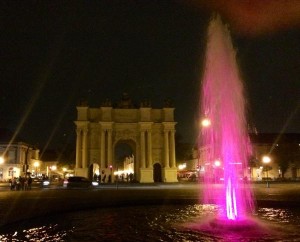 The next day, after reaching Ladenberger, I moved on towards Osnabruck. As I made my way through Lengerich, it was the first time I had noticed a sign for Berlin. Surely this would mean I’m getting ever closer to my final destination? My lifted spirits were quickly dashed when I noticed that the sign said ‘442km (275 miles)’ to go. Still, I remain focused and reach Osnabruck and find my hotel by dusk, giving me time to rest and prepare for the next day. My day ended on a high when I was reminded that donations for Friendensdorf International had reached an amazing £18,554.22. This generous support will make such a huge difference to Friendensdorf International and I am immensely grateful for the support.

By day 44 I had reached Bunde and was about to start making my way towards Rusbend. Whilst making my way through the beautiful scenery I started to ponder why so few people choose to holiday in Germany. The Latest data from the House of Commons Library shows that the most popular places for Brits to visit on holiday were Spain (11.7million) and France (8.9million). Germany was much lower down the list, with a figure of 2.4 million. The scenery in Germany is so beautiful and peaceful; I would highly recommend people paying it a visit. 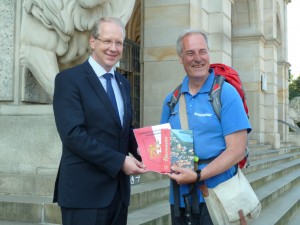 On day 46 I had reached Hannover and had also been met by my wife Xuelin. We decided to give me a day off from the walk as we had been invited to be received by the Mayor, Stefan Schostok. We had also been invited to take a tour of the ‘Hannoverians on the British Throne’ exhibition at the Landsmuseum.

We arrived at the Neues Rathaus (New Town Hall) to meet with the Mayor and it must be one of the finest town halls in the world. It reminded me more of a palace than a town hall and I am sure that was the intention when the building was constructed between 1900 and 1913.

We then walked the short distance to the Landesmuseum to view the exhibition on the Hanoverians on the British Throne and we were greeted by Dr Kaja Lembke, Director of the Museum, Dr Christian Vogel who was the curator of the exhibition. It was privilege to meet with the Mayor and have a guided tour of the exhibition; it was the encouragement I needed to get through the final stages of my walk.