Day 22 of my #walk4peace started in Mons with a plan to walk about 27 miles along one road to Charleroi. Unfortunately I was late leaving my hotel, which I always dread as this means walking the final hour or two of my walk in the dark. Heading out of Mons I soon arrived at St Symphorien Cemetery which was established by the German Army after the Battle of Mons to be the resting place of both German and British victims of the opening battle of WWI. I arrived but felt as if I had stepped back in time as there were around forty visitors dressed as British soldiers from WWI mingling around the Cemetery. 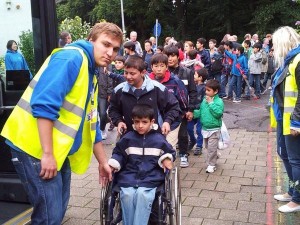 I unfortunately just missed my target of 27 miles in the day, but I eventually had to rest due to still having a number of problems with my foot. I then started the next day bright an early as I headed 23.7 miled from Charleroi to Naur. After a few days of torrential weather, my journey of Namur to Huy felt like a tremendous gift. As the rain cleared, the 26.2 miles journey to Huy was already starting to look better, but then I also found a cycle path which had a sign saying it led to Huy – result! This meant I was able to walk this stretch of the journey in pleasant (dry!) weather and on a flat surface in a glorious setting – every walkers delight! Following another 49 miles from Huy over the course of a few days, I was relieved to finally reach Oberhausen in time for the Friedensdorf peace walk on Saturday 30th August. We arrived to be greeted by Hanna Lohmann who has been our wonderful connector with the charity since the planning stage for the walk. Everyone had a glorious day, really entering into the spirit whether they were walking, running or in their wheelchairs. We were led off for the first kilometre by the children on crutches and in wheelchairs but there was no way they were going to miss out on being part of it. Their spirit and courage as they overcame the disabilities and injuries with a smile to take part in the event put a shame to my whinging about a few blisters and a bit of rain. 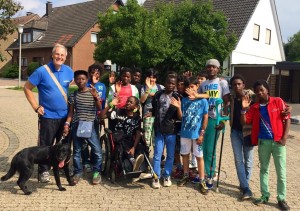 There was a galaxy of local musical stars who came onto the stage to perform songs. They even invited some boring old British politician onto the stage to talk about some crazy walk from London to Berlin but that was just to clear the arena and drive customers to the grateful food and drink vendors at the back. They all came rushing back though for the highlight of the show which was the children themselves singing a set of songs which they had rehearsed in advance and performing extraordinary dancing which they hadn’t. We all just lapped up the joy of the moment and gave thanks for the privilege of being part of it.

There was a serious side to the event which was to engage the local community whose support and understanding was vital. I spent some time getting know more about what goes on a Friedensodorf from Wolfgang Mertens. The magic of the organisation is the administrative machine which, with meticulous detail, collates potential candidates to be brought to Friendensdorf for treatment and then gets their paperwork in order. In many cases there is no birth certificate or any written document stating who the child is so this has to be generated to the satisfaction of immigration authorities at each end. Often there are no telephone links or people available to speak a common language.

Then there is the process of matching the medical diagnosis with the availability of medical care in hospitals across Germany. Then to supervise their follow-up care and eventually to get them reunited with their families. It reminds us that behind every caring and compassionate effort there needs to be extraordinarily efficient administrative machine. They may not capture the headlines but they are the ‘Intel inside’ of every successful organisation. In my own case it is an opportunity to thank again Xuelin and also Ashley Ren, Yu Long Mao and Michael Guo without whose efforts the ‘Walk for Peace’ would just be a nice little romantic idea.