Getting more women into sport – the tide is turning

I’ve never made any secret of my ambition as Minister for Sport to get more women, young and old, taking part in sport.   I’m evangelical about this because ‘doing sport’ is just such an important thing, and especially for women.

The thing is, it worked for me. As a girl I took up all sorts of different sports and I enjoyed every one of them. Apart from the obvious benefits like feeling fitter, stronger and generally healthier, it also worked wonders for my self-confidence, self-esteem and discipline. And, without labouring the point, these were all useful things for me personally to have, growing up at that time and in that part of the world. But it’s just as true for everyone.

Getting more women to take part is not, of course, easy. There’s no Act of Parliament that can instantly bring it about, no Statutory Instrument that will expedite a national change in attitude, bringing out the dormant Kelly Holmes or Nicola Adams in women who are determined that it’s ‘not for them.’

But we in Government can help create the conditions that will help. Not on our own, of course. Inspiring teachers, enlightened local authorities, imaginative sports bodies and supportive families are all part of the mix. 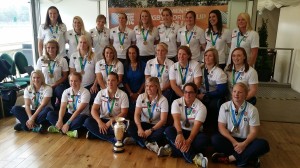 One thing that helps all of us, though, is the example and inspiration set by success at the elite level. Nothing, they say, succeeds like success and I’m delighted to report that the last few weeks have seen some real sporting triumphs for British women’s sport at the top level.

You’ll have seen the England women’s rugby team’s success in France earlier this month. In case you didn’t, they won the World Cup. Better yet, 20 of the finest players in the squad will now be paid for the first time, allowing them to give up their day-jobs, and get stuck into training in earnest. I don’t want to jinx them with a ministerial prediction of success, so I’ll simply point out that this can’t do any harm for their prospects in the Olympic Sevens competition in Rio in 2016.

Women’s cricket has been a real English success story in recent times too. Back-to-back Ashes triumphs, a series win in the West Indies and reaching the final of the World Twenty20 in Bangladesh tell their own story. And, like the rugby squad, their success has been rewarded with firstly a bespoke sponsorship deal with Kia, and secondly the terrific news that 18 of them are getting central England professional contracts. Clare Connor, who’s the head of England women’s cricket, summed it up rather well:

“The pay increase for contracted players is significant and signals the dawning of a professional era in every sense for England women’s cricket.”

The sponsorship deal is particularly important, by the way. Women’s sponsorship deals only account for 0.4 per cent of the total sports market, so Kia deserve special thanks.

Bouquets for the broadcasters

Elsewhere, the England women’s football team have qualified for next summer’s world cup with the game screened live on the BBC too. The FA have also re-launched the Women’s Super League and are clearly making more – and very welcome – efforts with the women’s game.

And while I’m handing out bouquets to the sportswomen and their governing bodies, let’s not forget the broadcasters – particularly BBC and Sky Sports – who, since the Olympics, have begun to cover more women’s sport, with BT Sport also getting in the mix too, broadcasting the Women’s Super League and women’s tennis. This is really important, and bodes very well for the future. The TV companies are rarely driven by sentiment; they have to make hard commercial decisions in a highly competitive market, so it’s significant that they’re getting behind women’s sport, I think.

The tide is turning

So is everything in the women’s sport garden lovely? Up to a point. On the positive side, there are a record number of young women aged 16-25 year olds playing sport: 1.56 million doing so at least once a week. But overall there still remains a gap of close to 2 million between the amount of adult men that play sport once a week (8.8 million) and women (6.8 million).

I’m pretty optimistic though. The Olympic and Paralympic Games in London clearly did inspire people to take up sport and take more interest in their national sportsmen and women and teams. Of course there’s more to do but, as far as women are concerned, I think the tide is turning and everyone who’s brought it about should be congratulated. It’s been a huge team effort.