In the 33 years since it first took place, The Great North Run has become one of the major fixtures in Britain’s incredible annual sporting calendar. A mass participation event that brings thousands of runners back every year and, thanks to the inspirational coverage provided by the BBC, encourages thousands more new entrants to join them.

It was 20 years ago when I was training to be lawyer in Carlisle when I completed the Great North Run. Although training for the run was tough, the adrenalin during the race and the feeling of accomplishment when I crossed that finish line is something I’ll never forget.

Like the London Marathon, there’s a certain, special joie de vivre about it. For the elite runners it’s a serious and highly competitive event. For the others though, it’s more about endurance, pride and – for the great majority of them – raising money for a special good cause. So the runners come in all shapes and sizes, and the race is all the better for it.

This year, however, there will be a landmark moment for the Great North Run.

One person will be the millionth to finish the race since its inception in 1981. Imagine that. Back then only 12,000 runners participated but over 57,000 will be involved on Sunday, running the famous half marathon course. 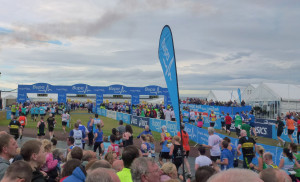 I am sure that event founder and British athletic great Brendan Foster would not have believed that it would grow into the race it is today when he first started it.

Brendan Foster has done so much for the sport he loves: inspiring a generation of athletes to get on the track, encouraging the masses to get involved in the world’s biggest half marathon, and along the way providing a massive boost for grassroots participation.

And he’s not stopping there; he’s now focusing on getting more women involved in the sport. In the first Great North Run 11% of the finishers were women. Over the first one million it has increased to 36%. He wants the next one million to be 50/50 and I’m right behind him.

The course starts in Newcastle then travels across to the iconic Tyne Bridge before finishing in the beautiful coastal town of South Shields.

The Heritage Lottery Fund provided over £400,000 to support a year-long programme to celebrate the Great North Run, which includes an impressive list of cultural celebrations with the aim of showcasing the region’s rich heritage, landmarks and promoting the North East as a sporting and scientific powerhouse of technology, enterprise and innovation. I would encourage everyone to join in the celebrations and enjoy the exhibitions and projects that are lined- up.

I’m sure the last few months have been busy for those running on Sunday. Most will have had to fit training around work, keeping fit, eating the right food and all the other day-to-day family commitments.

But as I wrote just now, the Great North Run isn’t just about competing. Many take part in memory of a member of their family or a close friend, raising funds for charities such as Alzheimer’s Research or Blind Veterans UK. This event is for everyone, and they come from all over the world both to compete and to show their support.

The organisers of the Great North Run should be proud of everything they have achieved. So it just leaves me to say good luck to all taking part and here’s to the next million finishers!