The Digital Revolution will be Mobile

It’s a cliché but it’s true: the internet has completely revolutionised the way we live our lives. In 2014, the world works, shops, studies and socialises online.

And the revolution is increasingly mobile. Some analysts believe that, by the end of this year, the majority of UK internet traffic will come from handheld devices rather than traditional desktop computers. Most online shopping is already done from smartphones and tablets, and you can even tweet while sitting on the front bench of the House of Commons.

But for all the advances in 3G, 4G – and even 5G – technology, it can still be hard to get a fast, stable and reliable internet connection while out and about.

That’s why the Government is investing £150 million to transform the digital capability of UK cities, making them even more attractive places to live, do business, visit and invest in. 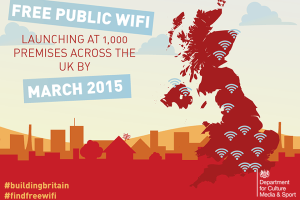 In the latest stage of our Super Connected Cities programme, we’re turning more than 1,000 public buildings into free wi-fi hotspots.

Over the coming months, libraries, museums, civic centres, transport hubs, sporting complexes and other buildings around the UK will begin to offer free internet access – some have already gone live, and the remainder are all on track to be up and running by next March.

Just imagine how you and millions of others could benefit from this huge boost to free connectivity. You could look up the story behind a painting while you’re standing in a museum. Study for your online university course while you’re lounging in the park. Even do a last-minute, panicked search for baby names while you’re sitting in the waiting room at the registrar’s office.

And, of course, there’s huge potential for business. For every £1 we invest in superfast broadband today, £20 will be returned to the economy. So it’s not just an investment in technology for today. It’s an investment in British business that will deliver benefits for many years to come.