A week in the world of sport

Last week was a great one for sport, and an uplifting one for me.  In two entirely different ways, it showed the power that sport has to capture the imagination of huge numbers from all walks of life, and make a positive impact on our national consciousness.

But before I get to that, I’d like to share with you some very good news indeed for football, our nation’s favourite game.  On Monday grassroots football received a £50 million lift to help fund state-of-the-art facilities and, we hope, develop the next generation of England football talent.

This ties in with the Football Association’s plan to improve grassroots facilities across the country.  The FA are going to match this funding pound for pound and this, together with contributions from the Premier League, Football League clubs and local authorities, will get us well on the way to reaching our ambition of raising £200 million in total funding.

What does this all pay for?

Well, the ambition is to help create 150 multi-sport hubs across 30 cities, with £8 million a year going into facilities, helping to build over 400 new all-weather 3G pitches, and £2 million a year on talent development, tripling the number of high level coaches in the country.  This, of course, will be great news for our next generation of England hopefuls and future World Cup hopes.

But it should go much more widely than that.  As I’ve said on any number of occasions, our goal is to get more people playing sport regularly and developing a lifelong sporting habit. So part of the funding will be spent specifically on training women and people from BAME background to qualify as coaches, so that as many people as possible can enjoy it.

Staying with football, but shifting the focus towards supporters, another thing we’re keen to do is help to give football fans a greater say in the running of the team they support. So this October I launched the Football Supporter and Engagement Expert Working Group, which will look at what more can be done to increase collective supporter ownership of football clubs, and what other ways there are to increase fan engagement.

We’ll be trying to find out if there are any particular legal or financial issues standing in the way of fan ownership and, if so, what we can do in government to overcome them.  This is the sort of issue that needs input from the whole football family: regular fans, supporters groups, those working in the sector – we want to hear from as many of them as possible. Everyone has until 9 January to let us know what they think, and the group will meet to discuss what’s been suggested early next year.

On Friday I had the honour and privilege of joining HRH Prince William at the National Memorial Arboretum to see him unveil a memorial to the World War One Christmas Truce, that extraordinary moment when some British and German soldiers stopped fighting in 1914.  The Football Remembers memorial was designed by a schoolboy – ten-year-old Spencer Turner from Farne Primary in Newcastle – after a UK-wide competition involving more than 30,000 schools.

The Christmas Truce football match – more of a kick-around, to be strictly accurate – a hundred years ago has captured the public’s imagination since it was first announced that there was to be a programme of events marking the war’s centenary.  How could people who, hours before, were exchanging gunfire and bombs, meet in no-man’s in the spirit of Christmas and goodwill to all?  And, having met, play football?

It says a lot about mankind’s essential humanity and hope, but it also provides a poignant illustration of how sport can transcend the sturdiest of obstacles.  I suspect that none of us lucky enough to be there in person, or the millions who will have later seen the pictures and read the stories in the media, would not have been profoundly moved by the simplicity and goodness of that long-ago moment in such a bleak place.

Two days later and my week ended in Glasgow for the BBC TV Sports Personality of the Year Awards ceremony.  This wonderful night is a British institution, and has been delighting and thrilling the public for an amazing 61 years.  As a child growing up I remember settling down in front of the TV every year and watching the review of the year’s sporting triumphs, each one coming up fresh as a daisy as we fretted over who we thought should win it.  Well, let me assure you, being there to watch it in person is truly an out-of-this-world experience – I’m still buzzing from it.

Congratulations to Lewis Hamilton and all the other winners – and finalists – of course, but a special mention to the team of the year, if you’ll allow me.  England women’s rugby team won ahead of Europe’s Ryder Cup golfers, the GB & Northern Ireland athletics squad and the Mercedes F1 team.  The England women earned their place by beating Canada 21-9 in Paris to win the World Cup for the first time since 1994, after three final defeats. 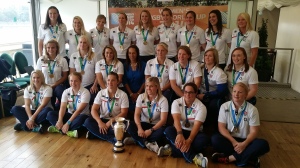 As team captain Katy Mclean said as she received the award: “This is a massive turning point for women’s sport.” And so it is.  I couldn’t be more proud.