Ringing in the New Year with tourism growth

VisitBritain’s Director of Strategy and Communications.

Patricia Yates, VisitBritain’s Director of Strategy and Communications, marks a year of growth for our tourism industry and looks ahead to 2015

At this very moment, up and down the country, people from all over the world are enjoying what Britain has to offer. Whether they’re wandering through Edinburgh’s Christmas markets, ice-skating at Somerset House, taking in a Premier League match or venturing out on a bracing walk along the Wales coastal path, more tourists are experiencing our country than ever before. 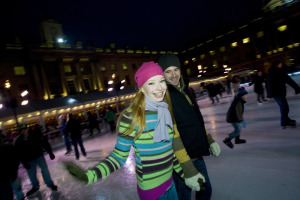 And they will keep on coming. Next year will be another exciting year for British tourism and one that our forecast predicts will bring in a new record of£22.2 billion tourist spending – a rise of 4.5 per cent and the largest yearly spend total in British tourism history. As for visits, we expect an increase of 2.5 per cent, with 35.1 million trips to Britain expected in 2015.

As this year draws to a close it’s time to look back over what’s been achieved, and onwards to new goals. So what did 2014 bring? Well, for starters: one vibrant Commonwealth Games, one hugely successful Tour de France Grand Départ, three major cultural anniversaries – Shakespeare, Dylan Thomas and Glyndebourne – and the strongest first half of the year in history for inbound British tourism.

Although we won’t receive the full-year provisional data for 2014 until February, the current figures show this last year is on track to break more tourism records, with spend forecast to be £21.3 billion. There were 16.5 million inbound visits to Britain from January to June, setting a new record for this time period, and a total of £9.4 billion was spent – also a new record and up from £8.9 billion during the same period in 2013.

While this is fantastic news, it’s important to remember that international tourism is a fiercely competitive business. Our competitors are making major improvements and we need to keep up. There have already been significant improvements to Britain’s visa policy and processing, particularly in China. Aviation routes are crucial for tourism’s growth and in 2014 we have seen welcome new routes coming into airports outside London – including those from China to Birmingham and from the Gulf to Edinburgh. There are also some big decisions in prospect with the results of the Independent Airports Commission due in the summer of 2015. But it’s not just air routes. Easy ticketing and access to good value tickets on our railways is vital for encouraging more of our international visitors to explore Britain.

We are currently running the ‘GREAT names for GREAT Britain’ campaign in China – a digital campaign to encourage the Chinese to name some of our attractions all around Britain. The campaign feeds into one of our major priorities for 2015: driving visitor numbers and spend across the nations and regions.  We are also just about to launch a new three-year global Countryside is GREAT campaign which will be our biggest single campaign of 2015. 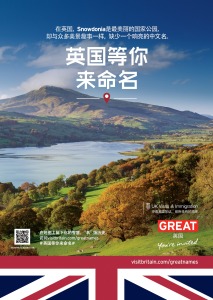 Working closely with the travel trade is the best way to ensure Britain is on the shelf and being actively sold overseas, so in February we will be debuting ExploreGB, our largest and most influential B2B tourism event, bringing top travel companies from all over the world to meet British suppliers and experience what Britain has to offer first-hand.

We look forward to continuing to work closely with DCMS in the New Year to continue tourism’s valuable contribution to the wider success of Britain’s economy.