Being a Games Developer is a strange concept for me in a lot of ways. I’ve always enjoyed playing games, but was often disillusioned by the output, and seemed to unfortunately grow out of playing games in my late teens. Setting up Sate of Play Games in 2008 was something of a shock to the system when it suddenly hit me that ‘oh yeah, I’m really making games now.’ In the past I have at times questioned the worthiness of making games in terms of it’s cultural and creative significance. However, this has always been a fleeting thought that passes by quickly, and when I peek beneath the surface I’m soon reassured it is the most beautifully creative industry to work in.

Being a women in this industry is apparently unique! Setting up our Indie Studio in 2008, it wasn’t a conscious decision to stick a flag pole in a male dominated industry. Games were just something I did, a way for me to tell the stories I wanted to tell in an amazing interactive, creative way. The process went like this. I made a game with my team, released it to the world and see what would happen, that was how I did things. 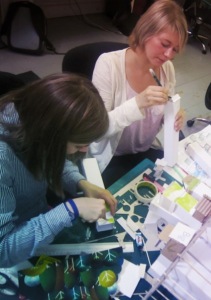 It was only when I went to meetings with clients, publishers, jury committees, or attended Gaming events I suddenly realised that I was very much in the minority. I knew women were playing games, the stats back this fact up, a study published in September 2014 by the Internet Advertising Bureau reveals that 52% of the gaming audience is made up of women. So how come when women and girls are obviously enjoying games, is there not that migration into the games industry as a career, the facts are that there is a shockingly low representation of women in the industry only 12% of Game Designers in Britain are women and more shocking only 3% of all programmers are women. This omission effects all parts of the industry, in the games that are produced to who you see speaking and attending conferences. There is never a queue for the ladies attending GDC!

So what can us as professionals in the industry do to redress this balance. I guess in a basic way by simply telling young women how amazingly brilliant it is to work in this industry would be the first step. Maybe uncovering the myths surrounding the games industry that I certainly thought were the case when I was growing up would help. For example, you don’t need to be an expert in maths to work in the industry of course if you wanted to be a programmer it certainly would help, but, I’m not particularly good at maths and I have managed to have a career in the industry. What this industry is about and what it is crying out for more is creative individuals and we should shine a light on those people in the industry that are demonstrating this.

We hope we demonstrate this in State of Play Games recent game Lumino City (www.luminocitygame.com) with it’s creative ambitious and the cross disciplined team we worked with. The team was a 50/50 split in terms of gender. I was the Game Designer and Producer, we worked with a female architect, model makers and paper artist and of course some fantastic male designers and developers too. 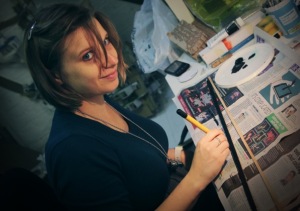 Catrina Stewart was the architect, a graduate of the architecture course at UCL. She brought her own unique style to the process, and knew techniques for making models which helped us a great deal. The very fact she didn’t think along the lines of well-worn games design cliches gave her designs something fresh.
Amy Dodd brought excellent model making skills to the process, and so did Sophie Shenkermeyer, who worked on TV and film props. Both brought fresh skills and approaches, and it’s this kind of thing that should be promoted to aspiring young women at school and colleges. You don’t need to make games in the old way any more.We hope Lumino City also demonstrates the breadth of creativity within the game industry. We worked with a cross-disiplined team, everything you see on screen was made by hand. We have tried to do something unique and ground breaking in the way we made this game, and after three years in development it feels like we achieved that.  Others could too.
What I hope we have achieved is inspiring young people into the industry, we hope we can show them that it’s not only pixels and equations that are the only way to build a career in video games. A creative spark and imagination will be your most important tools.