However even in 2015 there are still people out there who have a problem with either or both of these propositions. 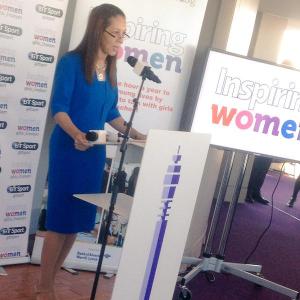 So I was very pleased to be at the BT Tower last Tuesday for an ‘Inspiring the Future’ event to promote the idea of getting more women to push for jobs in the sports world.  Lawyers, PR people, event organisers, box office and shop staff, accountants, administrators  – sport needs all these people to help not just a strong elite sport sector but a strong grassroots too.

Inspiring the Future, by the way, is a campaign to get people who work in different fields to go into state schools to tell the students how they got into their job, why they like it and how the kids can follow in their footsteps if they wish.  Around 3,000 schools are taking part and 15,000 volunteers have gone into them to talk about their own experiences. 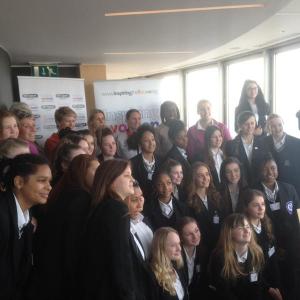 The event I went along to was for an off-shoot of this called ‘Inspiring Women’ which has a particular focus on getting women to go for jobs normally associated with men, for one reason or another.  So Clare Balding, Christina Ohuruogu, Stacey Copeland, Miriam Gonzalez (who is the organisation’s patron) and I were promoting a forthcoming week – 23-27 February – when we’ll be trying to get a thousand women working in sport to volunteer to go into schools to promote the opportunities that women have to work in this wonderful area.

I’ll be going into a school in Maidstone to tell my own story: how I went from being a schoolgirl who faced down the bullies at a tough school in Carlisle to landing what I believe is the very best job in politics and the role that sport played in that. My message?  Barriers are there to be kicked down if they stop you realising your potential.  The world of sport is exciting, fulfilling and fun; if that’s what you want, don’t let anyone get in your way.

You can see a video from the Inspiring Women event on the DCMS YouTube Channel.