On the 200th Anniversary of the Battle of Waterloo, Kirsty Hassard from the Victoria & Albert museum writes about the glittering Duchess of Richmond’s Ball and how women’s fashion was affected by the Napoleonic Wars.

Held in Brussels prior to the Battle of Waterloo, on 15th June 1815, the Duchess of Richmond’s ball is celebrated as being the most famous ball in history. Its illustrious attendees included the Duke of Wellington and the Prince of Orange, as well as the majority of the serving officers in the allied forces. The ball was interrupted by the news of Napoleon’s advance. Georgiana Lennox, daughter of the Duchess stated that ‘some officers had not time to change their clothes and fought in evening dress’ at Quatrebras, the battle which preceded Waterloo.

The Fashion Museum, Bath has two dresses reputedly worn by two sisters who attended the ball,   the Percival ladies were the sisters of Wellington’s aide de camp. The dresses are made from a brown silk gauze. They have a low cut, high waisted bodice, and full length skirt which has been gathered at the back. The style is very typical of the early nineteenth century. The long sleeves of the dresses are indicative that they are more likely to be dinner, than evening dresses. 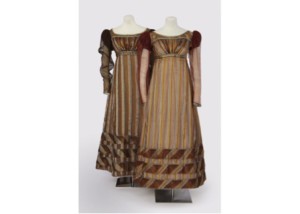 The Battle of Waterloo marked the end of over twenty years of constant warfare during the revolutionary and Napoleonic wars. It can be of little surprise that this had an effect on the fashions of the period. Images of war, and soldiers in uniform became highly visible during this period, portrayed in paintings and reported in newspapers.

Fashions for women reflected the militarised environment, during and after the conflict. The ornamentation on men’s uniform were reflected in many aspects of fashionable dress, such as on hats, bodices, spencer jackets and pelisse coats. This walking dress from the collections of the Victoria and Albert Museum, dates from 1817. It displays many features reminiscent of a soldier’s uniform, such as braiding, epaulettes and tassels. 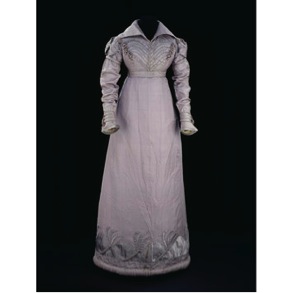 The militaristic fashions were disseminated in women’s fashion magazines and fashion plates, such as this one showing a riding habit from 1817. It indicates the continuing popularity of military styles. The figure is shown wearing a riding outfit. The coat, with its epaulettes, frogging and braiding, worn with a plumed hat, was very reminiscent of a hussar’s uniform. These styles were influential on fashions for years after the conflict ended. 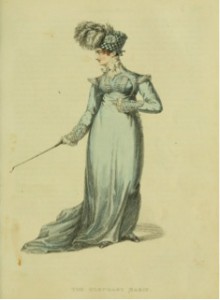