What it means to win Museum of the Year

Dr. Maria Balshaw is Director of the Whitworth, University of Manchester and Manchester City Galleries . http://www.whitworth.manchester.ac.uk/about/staff/drmariabalshaw/

In today’s guest blog post Dr. Maria Balshaw, Director of the Whitworth, University of Manchester and Manchester City Galleries  explains what it means to be awarded Museum of the Year.

As I write this, the Whitworth, the University of Manchester’s gallery in the park, has been Museum of the Year for just over two weeks. I think we are all still in a slight state of shock, although of course we wanted to win the Art Fund’s prestigious prize, we were being judged alongside five other deserving venues, from the Tower of London to the MAC, a brilliant contemporary art space in Belfast.

So, why did the Whitworth win? After all, during 2014 our gallery was closed, undergoing the largest transformation in its history, a £15m development that would double it in size and connect it to the park it calls home. Yet while the builders were on site we took the decision to keep the Whitworth “open”, by running activities across Manchester – events that took the gallery to new places, and introduced our wonderful, eclectic collections to new audiences.

For the first time, for example, we displayed some of our best loved artworks at Selfridges. During the Festival of Imagination, works by Picasso, Lucien Freud, Jacob Epstein and hung in the windows of the Manchester store, bringing a taste of our collection to thousands of shoppers. It was followed by a series of in-store talks from some of the people we regularly work with, among them Jeanette Winterson, Maxine Peake, Jeremy Deller and Richard Wentworth to academics from our campus like Professor Phil Manning (a paleontologist) and Professor John Mcauliffe from the Centre of Creative Writing.

At the other end of the shopping spectrum we popped up in Hulme Asda, running a fortnight of art workshops for local families who would not otherwise come to the Whitworth or set foot on our university campus even though it’s on their doorstep. 250 families told us it was their first contact with the gallery and were excited to find out that the gallery offered programmes of activities for families. We have welcomed very many of them back to the gallery since reopening.

A lively adult programme saw an art “pub crawl” in some of the city’s best traditional pubs, and took the gallery into concert halls, residential care homes and hospitals, and staged a live music night inside a microbrewery. The Whitworth Young Contemporaries programme (young people aged 15-25; part of the nationwide Circuit programme) worked with 26 different artists at locations ranging from skate parks and youth centres to pupil referral units and youth charities. In all, we worked with almost 7,000 people at over thirty locations. 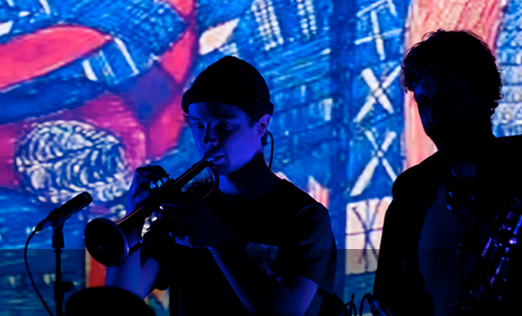 Behind the scenes, the acclaimed British artist, Cornelia Parker, developed a project with the Nobel Prize-winner, Kostya Novoselov, one of the University of Manchester physicists, who discovered graphene. The pair developed the first cultural use of graphene, triggering a meteorite shower over the Whitworth Park during our reopening weekend. It is a work that is typical of the new Whitworth, a university gallery whose collections, location and partnerships generate the sort of collaborations that could only happen here in Manchester.

All this meant that while the new building was taking shape so too were our ideas for how we could use the new gallery. Since we reopened in February, then, we have hosted events as part of the Wellcome Trust’s Sexology Season, the BBC’s Little Painting Challenge and Selfridges’ Bright Old Things talks series. Cornelia Parker has given a sold-out lecture and has been announced as an Honorary Professor at our university. Taking our Textiles exhibition as inspiration, fashion designer Katherine Hamnett has debated ethical clothing. We’ve had yoga every Thursday morning, there have been creative sessions for babies and toddlers and art workshops run with Age Friendly Manchester. Our Grand Hall has been the setting for live music gigs as well as the first ever industry event from the Creative Industries Federation. And all this alongside the ten, free exhibitions we opened with, our new art garden and sculpture terrace, and new artworks and events out in the Whitworth Park.

But the Whitworth is not just about art and ideas. It’s about art and people. Keeping the Whitworth open while we were closed was done with one aim in mind: to introduce what we do to more people than ever before. With over 230,000 visitors since we reopened – many more than we received in a year prior to closure – we feel that we have succeeded in that aim. And it is thanks to and for those people that the Art Fund awarded us the Museum of the Year prize, an endorsement of both the new building and the way it works better than ever before for all our visitors. When the Art Fund judges visited the Whitworth they experiences a Thursday Late curated by our group of Young Contemporaries – 15-20 year olds from across Manchester. They had programmed art, spoken word, performance, music and social encounters across all the gallery spaces and outside in the art garden and park – all inspired by our collection. More than 600 young people came, explored and enjoyed a social, cultural encounter developed by their peers with their interests in mind. One of the judges said she had seen the future of museums. We’re very happy with that thought.