In the first of a series of blogs exploring our BBC Charter Review public consultation and the questions it raises, we take a closer look at the opening theme, focussed on the BBC’s Mission, Purpose and Values.

The BBC is one of Britain’s most treasured institutions. It is part of all our lives in this country, and has a commanding presence in hearts and minds all over the world. It is independent of Government, and constituted by a Royal Charter which is normally reviewed every ten years. The current Charter comes to an end in December next year, and the Consultation we have published is the first of many steps in the process of reviewing it. This gives you the opportunity to express your views about the BBC, what it does well, what is less successful, and where it should be going for the next decade.

Our BBC Charter Review – Public consultation asks 19 questions in total, with each one seeking your views on a different aspect of the corporation and what it does. We hope that as many people as possible take the trouble to take part. The questions come in four groups and this blog looks at the first group: three questions about the BBC’s purpose and what it stands for. 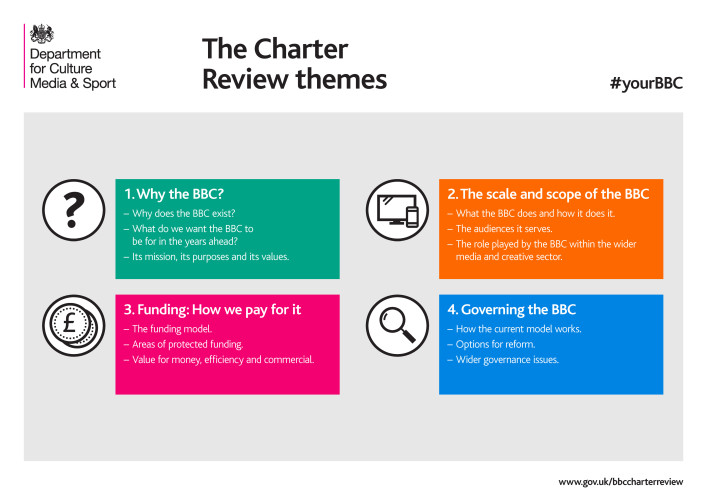 The first set of questions in the consultation paper seeks responses to some fundamental issues about the BBC itself. Things like What is it for? and Why do we have it? The Government has already said that we want the BBC to continue to adapt and thrive, and to play its part within the wider Public Service Broadcasting (PSB) and media landscape. But that doesn’t mean you can’t look at the principles and beliefs that it lives by, or consider different approaches. Basically, that is what Charter Review is all about.

What’s the BBC for?

So Question 1 is about the purpose of the BBC, whether it needs to be clearer and if it could it be improved. The reason these big questions are being asked now is that the BBC is getting on for 100 years old, and the Corporation that began life in the 1920s bears very little resemblance to what we have today. Everything and everybody changes, but for the BBC the pace and extent of it has been more striking than for many organisations.

These days, thanks to the revolution brought on by the internet and digital communication, the BBC is one voice among many. Most homes have easy, subscription-free access to more than 70 TV channels. For those with cable or satellite this number can be multiplied many times over. Increasingly people also consume TV and radio on computer screens, laptops, tablets and smartphones, on demand and on the move. 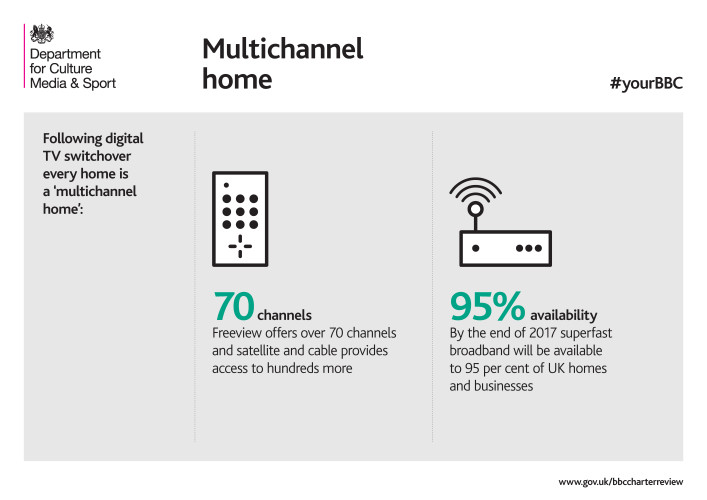 The current Charter has 6 public purposes for the BBC, which set out what it should be doing and how; question 1 asks whether these purposes are right, and if they need to change, particularly because of the huge changes over the last decade since they were introduced .

‘Universality’ – what does it mean, nearly 100 years on

Question 2 looks at the BBC’s long-standing commitment to ‘universality’ – but what does that actually mean? Is this about providing all types of content, meeting the needs of everyone, or making itself accessible, free of charge at the point of use, on every different platform, on and off-line? To put it simply, has the BBC become ‘too big’ and, if so, should it be more focused?

Underpinning all of the above is Question 3, which looks at whether the BBC should have a more formal set of fundamental values. Our paper suggests what some potential values for the BBC might be, and invites views on these (and whether having values more generally is a good idea).

The seven possible values suggested in the paper are for the BBC to be independent, impartial, high quality, efficient and offering value for money, transparent, distinctive and diverse. But these are a starting point for discussion. We want to know what people think of these suggestions, whether there may be other (or better) values to consider, and whether having a set of values at all is the right approach.

These then are the first issues that the consultation paper seeks your views on and you can have your say in #yourBBC now online, via email or via post. We’ll continue to update this blog over the summer and beyond that, looking in more detail at all of the issues brought up in the consultation paper.