BBC Charter Review – What the BBC does: scale and scope

In this, the second of our series of blogs exploring the BBC Charter Review public consultation and the questions it rises, we consider what the BBC does – in particular the scale of it and its scope.

The BBC Charter describes in very broad terms the sort of things that the Corporation should be doing to deliver its public purposes.  Put simply, it has to inform, educate and entertain, using TV radio and online services to do so. This gives the BBC considerable freedom and, over the last decade, it has grown and developed its services to the point where today it is the world’s largest Public Service Broadcaster.

The most conspicuous area of growth, of course, has been in online services, where new technologies mean that the BBC now has an impact on many more areas of our lives. This was very important indeed when digital technology was in its infancy and the BBC brand was a trailblazer and a major motivator in getting people to embrace digital television and the Internet. The Government directed the BBC to invest in – and promote – the emerging communications technologies, and this has been a success. But now that these two things are well established, there are worries that the Corporation’s dominance is, in effect, squeezing out other and smaller players who lack its reputation and resources.

It can also, of course, cross-promote its services – again to the detriment of its competitors. The BBC’s output across all media is also now so great that some in the industry fear that its services are overlapping, effectively putting it in competition with itself. In short, there are some who believe the BBC has become too big and powerful, distorting the market against the interests of the industry as a whole and the licence payer.

But for all that, it’s hard to deny that the BBC has in the past – and will no doubt continue to – raise standards and produce really high quality output.

There are seven questions posed in the second section of the consultation. Question 4 is about the issue of providing consumers with real choice, and asks whether the BBC is muscling out commercial competition?

Question 5 seeks views on whether the BBC’s impact on the market as a whole is positive or negative?

And Question 6 provides the opportunity to look at how large a role the BBC should have in developing the technological landscape in the future? Is this an appropriate use for licence payers’ money?

The next part of the consultation looks at the BBC’s audiences: the sort of people who use its services, and how well served each part of the audience is by the different parts of the Corporation’s output. Research tells us that almost all adults use the BBC each week, but its reach varies between different groups and satisfaction levels are not consistent. In very broad terms it seems that older age groups and those from a white ethnic background are best served, while young people and those from BME communities are less well served, and especially so with traditional BBC output. Audiences are broadly even when it comes to gender and class. When the country is broken down by region and nation, the position is less clear-cut: only six out of ten adults in the UK believe the BBC performed well in representing their region or nation.

There’s an international dimension too. Increased online connectivity has meant that BBC services reach a steadily increasing global audience – indeed the Director General wants it to be reaching 500 million people by the time of the Corporation’s centenary in 2022. So Question 7 asks how well the BBC serves its audiences.

The final part of this section looks at content: the amount of time the corporation devotes to different ‘genres’ such as sport, factual programmes, comedy, news and so on. In the end, it’s the type and quality of what the BBC provides for its audiences that determines its success, and provides the main justification for the licence fee. The framework agreement, which is part of the current Charter, requires the BBC to ensure that everything it produces displays at least one of the following criteria: high quality, challenging, original, innovative and engaging.

The BBC spends around £2.4 billion on content, with three quarters of this going to TV. Research by the BBC Trust shows that audience satisfaction with content across the piece is good, and has been so for many years. So Question 8 gives people the chance to comment on whether the BBC has the right genre mix across its services. 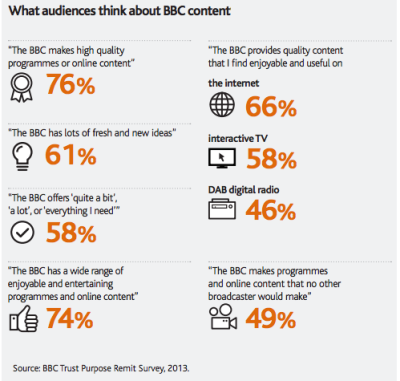 Question 9 addresses a related point: is BBC content both high quality and distinctive from that provided by its competitors? How should success be measured, and how can we ensure the Corporation is focused on quality rather than ‘popularity’ as measured by ratings? The issue of how programmes and content more generally are commissioned is also considered. The BBC accounts for more than half of  Public Service Broadcasting (PSB) investment, and the way it does it is governed by a regulatory framework and this, of course, has a significant impact on the independent production sector and the creative industries more generally. There are quotas requiring the BBC to commission a specified proportion of its output, on each of its platforms, from the independent sector. So Question 10 seeks views on how the current system could be improved by reforming the quotas, or by introducing more radical options.

These then are the second set of issues that the consultation paper seeks your views on and you can have your say in #yourBBC now online, via email or via post. We’ll continue to update this blog over the summer and beyond that, looking in more detail at all of the issues brought up in the consultation paper.