This is the third of our series of blogs exploring the BBC Charter Review public consultation. This time we’re looking at the section on funding.

The Government has said that it wants to review how the BBC is funded, looking in particular at alternative funding models, as part of Charter Review. The Corporation has a total annual income of around £5 billion, of which £3.7 billion comes from licence fee payers and the rest from its commercial activities, largely generated by BBC Worldwide. 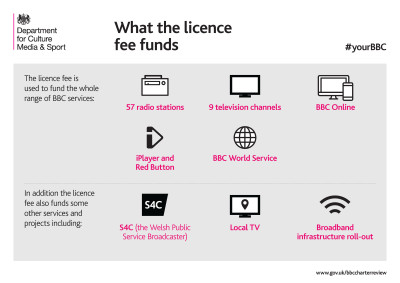 To begin with, it looks at the funding model. The consultation paper makes it clear that there is much to be said both for, and against, the licence fee. There are other options, of course, but no perfect solution that would be likely to satisfy all stakeholders, or work effectively over a long period in an era where technological and other change move apace. Two possible models have been ruled out, however: funding solely by advertising, or by direct taxation.  But three options are seen as being viable:

But whatever is settled upon, the separate – but related – issue of enforcing payment will also have to be considered. The Government is also considering a full subscription in the longer term but this wouldn’t be possible in this Charter period. So Question 11 seeks views on how we should pay for the BBC, and how the licence fee could be modernised.

The second issue in this section is what the licence fee can and must be used for, and in the latter case whether funding levels should be protected for some areas. The consultation also raises the issue of whether some of the BBC’s funding should be contestable, so that other providers could compete to provide public service content. Question 12 addresses these points.

Thirdly, the question of value for money and efficiency is considered. The BBC has made significant savings in the past few years and the NAO have commended them on their efficiency record. However, there have been a  number of high-profile cases where licence fee money has been used in a way that undermined public confidence in the BBC’s financial management. Question 13 therefore asks whether the BBC has been doing enough to provide value for money, and whether – and how – it might go further.

Finally, this section covers the BBC’s commercial activities which, as noted above, are a considerable success story, largely thanks to BBC Worldwide. But that part of the Corporation has a Government imposed borrowing limit and this limits its potential for expansion. Even so, its success may be seen as unfair on other commercial broadcasters and producers, so part or full privatisation of BBC Worldwide is an option to be explored in Charter Review. Question 14 looks to explore whether the BBC’s commercial operations, including BBC Worldwide, should be reformed.

These then are the second set of issues that the consultation paper seeks your views on and you can have your say in #yourBBC now online, via email or via post. We’ll continue to update this blog over the summer and beyond that, looking in more detail at all of the issues brought up in the consultation paper.