It all began with the Orphan of Zhao

Royal Shakespeare Company Artistic Director Gregory Doran discusses the RSC’s plans to mark Shakespeare’s 400th Jubilee year and how the organisation has been working with theatre makers across the globe. 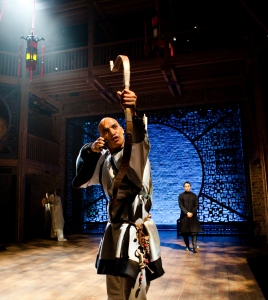 Though Zhao had its origins in the 4th century BCE, it was the first Chinese play ever translated in the West (in 1753, by the French philosopher Voltaire no less). And it was the first Chinese play ever presented by the Royal Shakespeare Company, when we staged a production, adapted by James Fenton, in 2012. The play turned out to be a moving story about individuals who sacrifice their own lives to save the life of a baby, the last of the Zhao clan. Our production received a lot of interest in China.

RSC producer, Jeremy Adams was recently in Beijing at the Third Annual Workshop for the China Collaborative Innovation Center for Theatre Arts Management (CCICTAM), to exchange ideas with theatre makers from around the world and discuss plans to take a major RSC tour to China in 2016, marking Shakespeare’s 400th Jubilee year.

But that is only part of the story.

We are working with Ruru Li at Leeds University to explore more works from the Chinese classical repertoire, currently are difficult to find in translation. We will chose a small number to receive “literal” translations and then work with our pool of writers to present viable contemporary acting editions of these plays. We have committed to staging at least one of these. It’s a very exciting collaboration.

And it doesn’t stop there.

One of the things that Jeremy is discussing in Beijing is the choice of a translator to work with us next year on a new translation of The Merchant of Venice. The translator will be embedded in rehearsals, engaging with actors and director as they wrestle with Shakespeare’s language, discuss the nuance of the text, and how it is paced, the subtle clues that Shakespeare writes into the text to help the actors deliver the play. 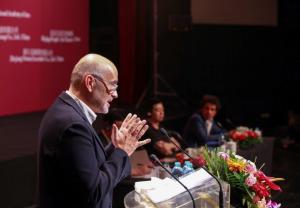 There are of course already many translations of Shakespeare in Chinese. The most celebrated perhaps are those of Zhu Shenghao ( 1912-44) who translated 31 of the plays, and died tragically young in poverty. His works apparently make up the core of the texts used for performance in mainland China.

However, here in the West, each time we put on plays by Euripedes, Ibsen, Chekhov or Brecht, we tend to commission new translations which will catch the modern ear and seem accessible and vital in production. Why should the same therefore not be true for Shakespeare today in modern China?

There is an Italian saying: “Traduttori:traditori:” which means “Translators:traitors”. It is a huge challenge to recreate not just the meaning, but the poetry, the epic and intimate scale of Shakespeare’s verse, the flexibility of his prose. We want to share that challenge with theatre practitioners around the world to produce a global Folio of Shakespeare’s works by 2023, the 400th anniversary of the publication of Shakespeare’s First Folio. 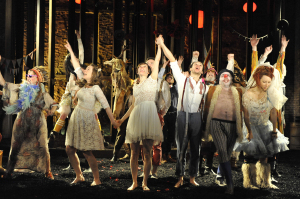 The translation of The Merchant of Venice, our first attempt, will be forged in our Stratford rehearsal rooms, examined and encouraged by our fellows at the Shakespeare Birthplace Trust and the Shakespeare Institute here in Stratford, and then crucially receive a production in China in (we hope) 2016.

We learn most about each other by sharing our stories. I hope this initiative, which has received such strong support from the Chancellor, and the Culture Secretary, will help to foster even greater understanding and exchange between our different cultures.