Head of Business Development at Localgiving

As part of plans leading up to #LocalCharitiesDay, the Government’s Office for Civil Society (OCS) backed two fundraising campaigns that encourage giving to local charities and community groups. OCS gave £250,000 to the campaigns, both run by Localgiving, to match online donations from the public.

The Grow Your Tenner campaign matched donations from the public up to £10 to local charities across the UK. The campaign ran from October to November and is projected to have raised over £1 million for local charities from nearly 19,000 donors, benefitting more than 1,300 charities and community groups.

Here’s just a few brilliant examples of how Grow Your Tenner has helped charities across the country:

Reading Mencap supports people with learning disabilities, their families and carers in Reading. It used Grow Your Tenner to run a social media fundraising campaign, using pictures of their service users holding £10 notes to encourage donations.

Reading Mencap raised nearly £2,000 through the campaign. These funds will cover the costs of their Helpline for people with learning disabilities and their families. The helpline receives around 275 enquiries per month and enables people to access indispensable support without needing to travel to their centre.

“Localgiving and Grow Your Tenner have made a huge difference. Individual and corporate fundraisers have been able to set up sponsorship pages for us, donors can set up Direct Debits, our fundraising team can make use of the free resources and nowhere else does such great match funding campaigns. It is also good to have fundraising website just for local organisations.” 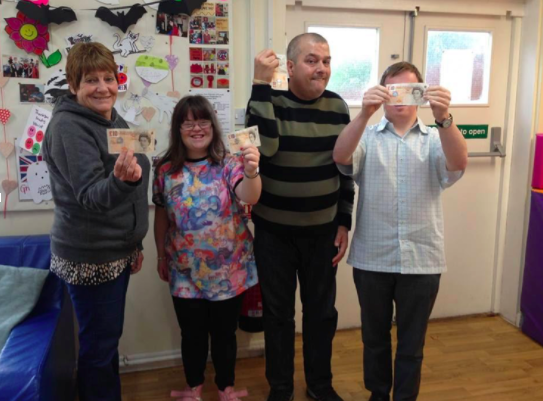 It used Grow Your Tenner to launch a campaign to raise £12,000 to cover free meals for 100 children in the nursery every day for a year. The fundraising campaign not only helped to raise funds, but better local awareness for the charity and the work that it does. The Grow Your Tenner campaign helped them gain coverage on BBC Bristol Radio and local parent magazines, whilst also significantly growing their social media following.

“The Grow Your Tenner has had a massive impact! It’s helped us to raise our profile in Bath and gave us a chance to demonstrate the breadth of work we do, especially as we are in the top 20% most deprived areas of the country. The campaign helps us to raise funds in a way that also generates better awareness of work in comparison to a grant application, which doesn’t help to create publicity.”

Stripey Stork is a baby bank based in Redhill, Surrey, which provides free items for babies and children of families in need.

It runs an annual campaign with Localgiving in the build up to Christmas to raise funds to buy Christmas presents. This year’s appeal has currently raised £2,750, including £600 match funding through Grow Your Tenner, which will enable it to distribute 700 gifts for children and 500 to their parents and carers. Grow Your Tenner has enabled the organisation to provide extra presents for children in need.

“Grow Your Tenner is fundamental to our campaign and has a massive impact on the amount of families we can support. The time-limited offer of match funding inspires people to give and the cost of a present is usually around £10; meaning the campaign enables people to donate £10 and get two presents. Last year the campaign enabled the group to get an extra 40 presents for children and this year they are hoping to raise enough to get an extra 70 presents!”

Calderdale SmartMove have been supporting homeless and vulnerably housed people to find accommodation in Calderdale since 1998.

On Friday 11th November around 70 individuals took part in a sleep out at Shay Stadium in Halifax to raise money for the charity. Fundraising pages were set-up on Localgiving, and Holly Lynch, Labour MP for Calderdale and her husband took part in the sleep out.

The fundraisers used Grow Your Tenner to reach out to their networks and encourage new donors to support the charity. A total of £5,250 was raised online, which will be used to create an emergency fund to purchase white goods and provide support to around 400 people in the next year.

And there’s still an opportunity to get involved in the second campaign – #GiveMe5 – which is running on Local Charities Day itself (16 December). Government and a philanthropist will match 1,000 £5 donations made to local charities on the day.

You can also support #LocalCharitiesDay now